"The Mexican Bubble: Is President Enrique Peña Nieto About to Fall to Earth?" (Foreign Policy, May 1st, 2013) 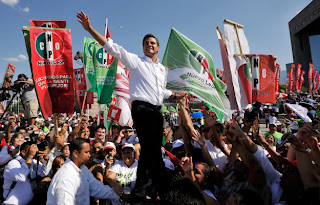 When U.S. President Barack Obama travels to Mexico this Thursday for his first summit with new President Enrique Peña Nieto, he's going to hear a lot about the country's uptick in international portfolio investment, its recent discovery of vast new petroleum reserves, and its new political grand bargain, called the "Pact for Mexico," in which the leaders of the three largest political parties have gone behind closed doors to hammer out deals on tax, education, energy, banking and telecom reform, among other areas.

But instead of giving priority to the interests of Wall Street and of Mexico's discredited political class, Obama should turn his gaze to Main Street and listen to the voices of the Mexican people on both sides of the Rio Grande. Otherwise, he risks committing the United States to a highly risky political game run by Latin American cronies that could soon end in disaster, with an impact that could be felt across North America.

According to the hype, Peña Nieto has already transformed the political landscape in Mexico after only four months in office. Time magazine hasnamed him one of its "100 Most Influential People in the World," claiming that he "combines Reagan's charisma with Obama's intellect and Clinton's political skills." The Financial Times raves that with the death of Venezuela's Hugo Chávez, Peña Nieto may now take up the torch of Latin American leadership and revive the "Washington Consensus" that predominated in the region during the 1980s and called for drastic restrictions in social spending and the implementation of "trickle-down" neoliberal economic policies. The Washington Post editorial board suggests that "Washington should be cheering Mexico's gridlock busting -- and taking it as an example." Meanwhile, Thomas Friedman, of the New York Times, has called Mexico the "Comeback Kid" and Shannon O´Neill argues in Foreign Affairsthat Mexico has now "made it."

Such exaggerations have no basis in reality. Even after months of an expensive, high-profile media blitz, Peña Nieto has begun his administration with the lowest public approval rating of any Mexican president over the last two decades. Only 50 percent of Mexicans approve of his presidency today, much less than the 70 percent who supported the first non-PRI president, Vicente Fox, at the beginning of his term, according to Reforma newspaper. Peña Nieto's approval rating is even lower than that for presidents Ernesto Zedillo and Felipe Calderón at the disastrous crisis-ridden beginnings of their terms, according to the same source.

A recent poll also shows increased public skepticism in Peña Nieto's, "Pact for Mexico," Today, only 21 percent of the population believes that this pact will benefit them while 31 percent are convinced that it will harm them. This same independent poll reveals that the majority of the population perceives the agreement to be in the interests principally of the political parties and big business. Only 35 percent think that the country as a whole will benefit...